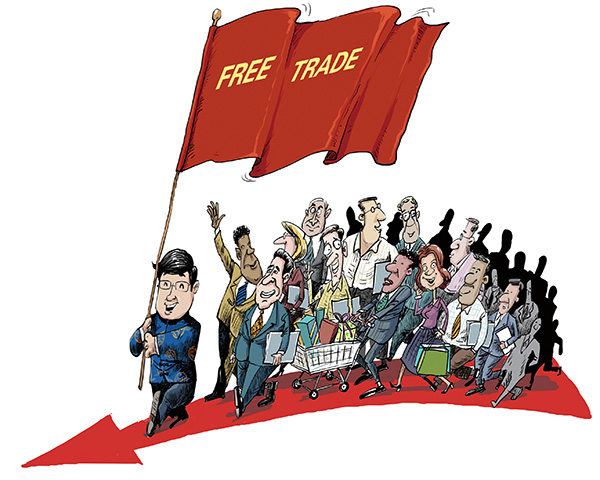 In the final part of our series of blog entries on free trade and the policies in this area of the current administration of Donald Trump, we look at the arguments for and against free trade.

As you read this blog entry you should become aware that there are valid arguments for protectionism, but those arguments often relate to specific situations that are not currently found nor faced by the United States.

To finance national expenditure, governments of developing nations may resort to the imposition of tariffs since tariffs are comparatively easy to administer and collect.

However, the imposition of tariffs can often turn out to be a double-edged sword.

If a developing nation attempts to increase the income derived from the imposition of tariffs by increasing the tariff-rate charged, the price of the imports may increase to such an extent that demand falls, and the resulting income from tariffs also may fall.

The protection of domestic industry argument

The argument is a simple one: the imposition of tariffs is essential for the survival of the domestic industry.

Most economists debunk this argument because they embrace the theory of “comparative advantage”. This group of economists is often referred to colloquially as “globalists”.

This is an emotive issue.

Often job losses are involved, and it may not be possible to replace those job losses in the same geographic area.

The theory of comparative advantage ignores the emotive issue by arguing that the welfare gains of the citizens taken as a whole would outweigh the loss of those citizens directly affected by free trade competition.

In other words – it’s a harsh and brutal world especially for those that lose their jobs with little hope of finding a replacement locally. There are some parallels to the situation in respect of the Petrotrin refinery here.

Globalists are often blamed for the decline of the “Rust States” in the United States (those areas that have suffered extensive deindustrialisation).

Those that argue that infant industries require protection contend that the costs infant industries incur fall as their operations expand as a direct result of economies of scale. While they are growing, their cost structure may make them “uncompetitive” on an international level.

There is a counter-position to this view: by the closing of international markets, the imposition of tariffs severely restricts the ability of international firms to gain economies of scale by exporting to closed-off economies protected by tariffs.

This is a position also advanced by Globalists.

Tariffs are often promoted as a mechanism for protecting jobs.

Many economists doubt that tariffs are effective at promoting employment, arguing that they simply export unemployment. This means that any rise in domestic employment is countered by a rise in international unemployment.

If you are wondering what “autarky” means, then the following defines that term in its purest form.

Autarky can be defined as the quality of being self-sufficient and the term is usually applied to specific political states or their economic systems.

Autarky exists whenever a company or country can survive or continue its activities without external assistance or international trade.

If a self-sufficient economy also refuses all trade with the outside world then it can quite rightly be referred to as a closed economy.

Autarky in its purest form is impossible to achieve. In simple terms, no modern nation, regardless of how rich or how well-endowed it may be in natural resources, could practice self-sufficiency and thrive.

A common argument used to promote the imposition of tariffs is that the survival of a key strategic industry is required in order to promote the national interest. This argument is the genesis of the Trump tariffs under section 232 of the Trade Expansion Act of 1962.

There is a simple counter to this argument.

If supporting an industry is key to the national interest, then those industries should be given direct incentives and tax breaks in order to allow them to meet foreign competition and survive.

In such a situation, the subsidy or tax incentive granted is the price paid by the nation as a whole to maintain the industry in the interest of national defence or security.

The balance of payments argument

The balance of payments is a statement of all transactions made between entities in one country and the rest of the world over a defined period of time. Balance of payments data is usually produced on a quarterly or yearly basis.

Trade imbalances can and do appear between different countries’ current accounts.

Trade imbalances can and do generate tensions between countries.

Donald Trump campaigned on a platform of reversing the U.S.’s trade deficits, particularly with Mexico and China.

Trade surpluses are equally unpopular in some quarters.

The Economist Magazine argued in 2017 that Germany’s surplus put “unreasonable strain on the global trading system, since “to offset such surpluses and sustain enough aggregate demand to keep people in work, the rest of the world must borrow and spend with equal abandon.”

In the case of extreme balance of payments problems this can lead to devaluation.

But this is often an unpopular political step. To avoid a potential devaluation, a nation may try to redress its balance of payments difficulties by restricting imports through the imposition of tariffs.

What are your thoughts on tariffs?